PSOAS - The deepest and most mysterious muscle in the human body

Introduction to movement anatomy and physiology

ILEO PSOAS IS A THICK AND DEEP MUSCLE AND IS THE MAIN PROTAGONIST IN DETERMINING THE POSITION OF THE PELVIS AND THE LUMBAR TRACT AND, CONSEQUENTLY, OF THE WHOLE POSTURE.

The iliopsoas muscle is the most powerful flexor of the hip.

It is a  composite muscle formed from the psoas major muscle and the iliacus muscle. The psoas major originates along the outer surfaces of the vertebral bodies of T12 and L1-L3 and their associated intervertbral discs. The iliacus originates in the iliac fossa of the pelvis.

Both muscles descend passing anteriorly to the coxo femoral joint and are inserted on the small femoral trochanter, in the upper part of the femur. 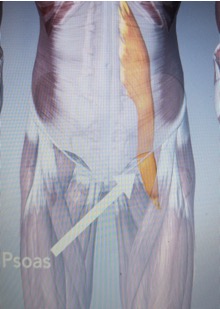 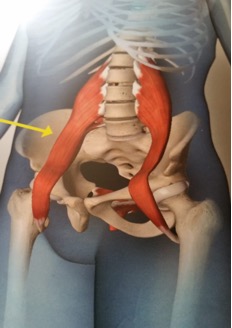 Iliopsoas are essential for maintaining balance, because they are the only muscles that connect the spine to the lower limbs and allow us to lift our legs, walk, run and jump.

It is interesting to note that there are important anatomical relationships of this muscle with vital organs and structures, in particular with the diaphragm, kidney, ureters, colon and with nerve plexuses of the neurovegetative system.

The iliopsoas muscle is therefore fundamental towards the position of the skeletal structure and has a large influence at the visceral level and vice versa and is crucial for the health of the whole organism.

From a physio pathological point of view, a contracture of the psoas manifests itself with low back pain, generalized malaise and lumbar iperlordosis, as the vertebral bodies from which it takes insertion suffer traction forward.

This also results in a shortening of the muscular masses of the back, laterally to the vertebral column

The contracture of a single muscle, right or left, also determines a rotation-torsion of the pelvis, with serious repercussions on posture and deambulation. 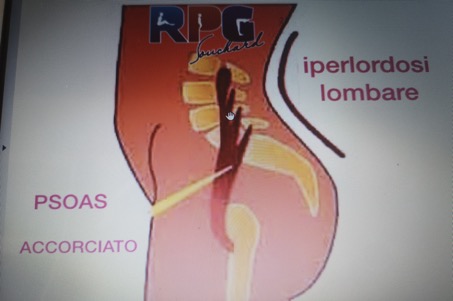 According to the Taoist tradition the psoas is correlated with the first dan tien, according to the Ayurveda it places itself in energetic contact with the first chakra, then with the second and with the third its correlation with the autonomic nervous system and with the primitive reptilian brain explain the occurrence of its contracture in chronic emotional stressful situations; it is in fact ascertained that it is the first muscle that activates when a “fight flight or freeze” state occurs, caused by reactions of fear and danger.

When submitted to stress and tension, we constantly contract the psoas, the muscle progressively begins to shorten, causing a series of painful situations, such as back pain, sacroiliac pain, sciatica, degeneration of hip cartilage, pains in the knees and even dysmenorrhea and infertility.

In addition to all these structural problems, the contracture and shortening of the psoas exert compression of the nerve branches, make the diaphragmatic breathing more superficial and frequent; it seems that they negatively interfere with the immune system and that they are even the cause of allergies and intolerances

These problems are also aggravated by our lifestyle which forces us to mainly seated or improper postures, uncomfortable shoes, tight jeans or training workouts based on excessive muscular effort (devastating abdominal exercises ..).

Therefore, in some cases, a vicious circle is determined, in which anxiety and stress determine a contracture of the psoas and these contracted muscles, in turn, facilitate the establishment of an anxious state, also favored by a contraction of the muscular portion of the diaphragm (as we have seen, it is in contact with the psoas) which results in a hasty and superficial respiration.

It therefore seems likely to compare the psoas muscles as a real sensitive and intelligent center that reacts to fears, unresolved emotions, instinctive reaction to survival, previous traumas numerous studies indicate that in fact a good functioning of this muscle is a determining factor for physical and psychological well-being and its correct position would help to overcome stress, anxieties, fears

During training we hear the instructor repeating over and over to open the kua and fight the lumbar lordosis by releasing the coccyx, sacral and lumbar areas, where the point and the area called ming men are located (door of light, door of the life or door of the heavenly mandate).

It is then clear the reason for these continuous and pressing requests: we must try to lengthen the psoas (kua) as much as possible.

The stretching of the muscles occurs slowly and gradually over the years and progressively leads to a more correct and more stable posture, an alignment of the cervical and lumbar vertebrae, with consequent less crushing of the intervertebral discs and articular cartilages.

The conscious deepening and the lengthening of breathing are not to be underestimated, they are always underlined during training and, in turn, have the function of relaxing muscles and emotions. Patrick A. Kelly writes:

The body has intelligence and the joints will adapt to under-use of the full range of movement by reducing their range of movement. Habitual and restricted patterns of movement accelerate wear on the joints in specific places rather than spreading it over the full range of movement. Tension in the surrounding muscles blocks the normal passage of fluids into and out of the area, restricting the body’s natural healing processes. This tension also pulls the faces of the joints together with eccessive force and grinds one against the other as the joint moves, aggravating natural wear and tear thereby shortening the life of the joint. Joint problems are accepted as almost inevitable when people age, but this need not be so. The loose free-flowing movements of Taiji counter these causes, effectively maintaining the health of the joints.